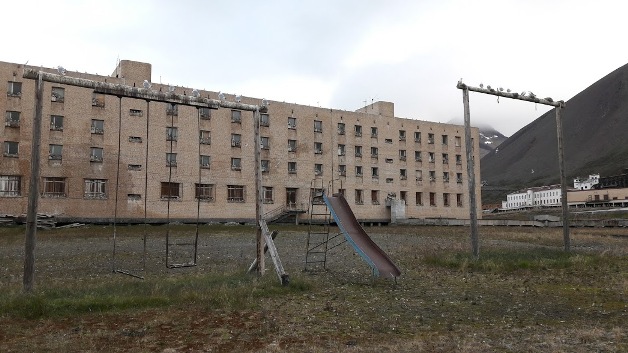 Imagine a community where everyone lives in harmony, where everyone has a job and lives a happy life. Today, we would describe this place as an Utopia, but life in the Russian mining village Pyramiden used to be like this. This little piece of paradise, however, wasn’t situated within the borders of Russia, but in a remote corner on the Norwegian archipelago Spitsbergen. Today, the utopia has disappeared and its population has been replaced by a colony of black-legged kittiwakes. Only a handful of Russians still live in the city, trying to keep the dream alive, but in reality Pyramiden is no more than a ghost town, a collection of bygone memories and a paradise… for urban explorers. 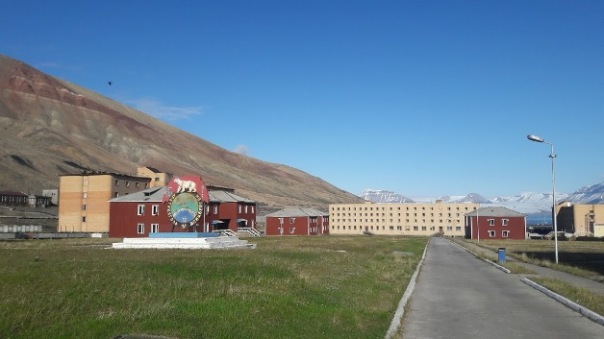 The fall of Pyramiden

Pyramiden once was the realisation of the Soviet dream. A place where everyone is happy, a community not based on money and where no one falls short. But what happened to this thriving community where 1000 people used to live, you wonder? From one day to the next, they had to leave and return to Russia. It wasn’t a voluntary act but they simply were obliged to leave the coal town and their lives behind. In the early 90s, Russian economy started to collapse and the decision to keep financing a community far away from the mainland while the mining industry wasn’t making money, wasn’t justified anymore. When, in 1996, a charterflight arriving from Moscow bringing back mine workers from Pyramiden and Barentsbrug, crashed in Longyearbyen, the Russians were fed up. Pyramiden was closed down and the last people left the village in 1998.

Nowadays, If you visit Pyramiden, all you will see are vestiges of the past… and a newly renovated hotel, which is owned by – just like the rest of the mining town – Arktikugol. A last attempt to make money out of it. Not with coal, no they gave up on that idea, but with tourism. A small number of Russian guides take the daily shipment of tourists from Longyearbyen on a tour around the most preserved buildings of the coal town. But as you can guess, this was not what we were setting our eyes on. We chose to arrive in Pyramiden at 8pm, after having kayaked to the nearby glacier. This way, we would fight shy of the herds of tourists, find a real deserted town, and truly experience the atmosphere of a ghost town. 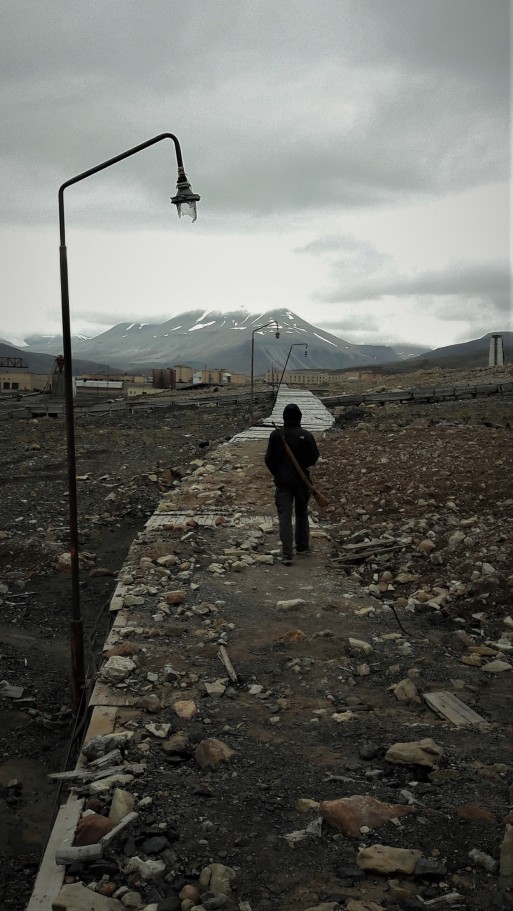 Urban exploring with a rifle: a different experience

‘Don’t forget to lock up the safety of your rifle.’, I tell Linsay, while I check where I’ve put the flares. During my sailing expedition two weeks ago, I already visited Pyramiden, so it seemed interesting to show Linsay the best places on our own. The rifle, that is a safety measure for luring polar bears. They love snoozing in the dark corners of the abandoned buildings. At the same time, it is obligatory to be armed when leaving the inhabited settlements. And Pyramiden simply doesn’t count as a inhabited settlement. Our ambitions were a bit bigger than when I wandered here around two weeks ago. Then, I only got to see the buildings on the outside. This time, we were hoping to be able to enter some of them and do some urban exploring. Exploring old, abandoned buildings and taking photos as we go, without causing any damage. When we walk along the shores and enter the harbor, Linsay is already impressed. A collapsed bridge leading to the water requires us to do our first scrambling. Many pictures later – I have to admit that the glacier in the background of the harbor was a great setting – we continued our walk. A gravel road leads to the center of the mining settlement, but instead we chose to use the wooden platforms flanked by tilting street lights to enter the town. We keep an eye on which planks are still reliable to carry our weight, while our hopes were set on catching a glimpse of the former coaling mine, somewhere on top of the nearby mountain, but unfortunately clouds hanging quite low obstruct the sight. To be honest, weather is too foul to be making good shots, but the abandoned and desolate atmosphere that accompanies it gives it a special touch. Linsay can hardly hide her enthusiasm. Photographing on one of world’s most inaccessible places, it has a certain charm. The wooden platform ends near a yellow building that seems to be invaded by a colony of seagulls. We could hear their incessantly screaming from a distance, and the rusty children’s playground in the foreground made the whole view look like a Hitchcock’s The Birds scene.

I double check the rifle I’ve taken over from Linsay, before entering the swimming pool building at the end of the center. Even though it hasn’t been so long since I’ve wandered here around, some things seem to have changed. Two weeks ago, we had found it impossible to enter the building, while this time it only took us about five minutes to find an unlocked door. I switch on the flashing light app on my smartphone and lighten the dark corridors of the building. ‘You go first.’, Linsay says, fearing a polar bear might be hiding itself in a dark corner. The building seems to be bigger than we thought, but after about ten minutes of exploring we discovered the swimming pool on the second floor. Lane lines divide the pool in three as if they served for their use just yesterday and a metal stair led to the bottom. Only the water was missing. As if someone had pulled the plug.

Once outside in daylight, Linsay takes pictures of the most northerly statue of Lenin, located a bit further. ‘Do you mind if I take some more pictures of the square before we explore further?’, she asks, while her finger slowly touches the shutter button to capture another photo. Again we see the Nordenskioldglacier in the background, while the decayed buildings around the square emit a grim atmosphere. Nineteen times three quarters of a year of freezing temperatures alternated by three months of thaw clearly has left its traces.

We succeed in entering some more bathing facilities, even though most buildings don’t seem accessible. ‘Maybe the building over there?’, Linsay points. We have no clue what the purpose of the building was, but it didn’t took long before we could find an open door here as well. Some dark corridors led us to a big room where sunlight beamed in. A giant mosaic of snowcapped mountain peaks, polar bears and ice caps dominated the room. A display of empty food trays gave away this used to be the canteen, the place where every resident of Pyramiden ate collectively.

Both of us were surprised when we checked the time. Midnight had passed a long time ago. It’s amazing how fast you forget about time when exploring in Pyramiden. But on the other hand, it’s amazing how time has forgotten about the town as well.

← Sailing North: An Arctic journey in the footsteps of Amundsen
78 degrees North: a kayak expedition in the Arctic →