Everything You Need to Know Before Hiking a Volcano in Guatemala

Seeing an active volcano spitting lava was high on my bucketlist. So you could imagine me being excited when I traveled to Guatemala and learned that the country was located along the notorious Ring of Fire.

Guatemala and its Volcanoes

Guatemala is the first country on my Central- and South American exploration journey after having visited Belize in 2018. The country has no less than 37 volcanoes in its territory of which three of them are active (Pacaya, Fuego and Santiaguito. All of the are located along the notorious Ring of Fire, a horseshoe-shaped area around the Pacific that is known for the frequent occurrence of earthquakes and volcanic eruptions caused by various subduction zones of tectonic plates in the region.

The most popular place to climb some of these (active) volcanoes is Antigua, a small colonial city two hours away from Guatemala City. The city is literally surrounded by volcanoes with Volcan Agua overlooking the town center. From here tours are offered to Pacaya, Acatenango and Fuego.

Volcan Fuego, 3763m – very active volcano, erupted for the last time in 2018. It’s possible to hike to the knife-ridge for better view on the eruptions.

What You Need To Know Before Going On Volcano Climb

Despite the fact that they offer tours to dormant and active volcanoes, be aware that this is no safe territory. You are dealing with higher altitude and active volcanic terrain. Always go with a guided tour! In fact, guides are mandatory.

Most volcano climbs start in forested terrain. Still there might be quite some sections with volcanic sand. The higher parts of the slopes of the volcano is all volcanic black sand, which makes hiking much more strenuous. It’s not uncommon to be putting two steps up, and sliding one down again.

The tours offered by different companies all offer about the same. However the main difference of option is the choice between a day hike and a overnight hike. If you are able to do so, we highly recommend doing the overnight trek as camping on the slopes of a volcano is a unforgettable experience.

Majestic sunrise over a chain of volcanoes

What gear do you need?

If you are doing an overnight trek, you will need camping gear. No worries, all of the tour agencies offer tents, sleeping pads and sleeping bags, often at no extra charge.

Hiking boots are a must! You will be hiking steep uneven terrain and will need all the grip you can get. Especially during rainy season.

Layers of clothing are essential as you will be starting in hot weather, but finishing your summit bid early in the morning when it can be quite cold and windy. Bring layers so you can adjust to the temperature easily.

If you are going on an overnight trek, you will need a headlamp of flashlight. Summit attempts start early in the morning (3.00 am) well before sunrise. It’s impossible to climb a volcano without having a headlamp.

Walking sticks can be quite useful when hiking uphill and downhill. At the trailheads you can often rent wooden walking sticks for 5Q (0,7€).

Is climbing a volcano hard?

Yes. I’m quite used to hiking and climbing in general, but climbing a volcano is physically and mentally harder. Main reason for this is that you are hiking most of the way on volcanic sand. Imagine running on a beach, only uphill and with less oxygen!

The Best Volcanoes to Climb in Guatemala

Definitely the #1 choice when it comes to climbing a volcano in Guatemala. This 3967 meter high peak is a dormant volcano near Antigua, offering views on no less than 5 other volcanoes, including the very active Fuego which erupts on a very regular base as in  ash plumes and occasional lava flows. Downside is that it is a very strenunous trek, we highly recommend as an overnight tour. Allthough, prepare not to get much sleep as the neighbouring Fuego will keep you up all night loud eruptions.

The most active volcano in Guatemala with frequent eruptions. No, don’t worry you will not be going all the way to its crater rim. Instead you end your trek of the knife-edge ridge to get a clear view on the volcanic activity. Follows the same trail as Acatenango for a main part of the route. 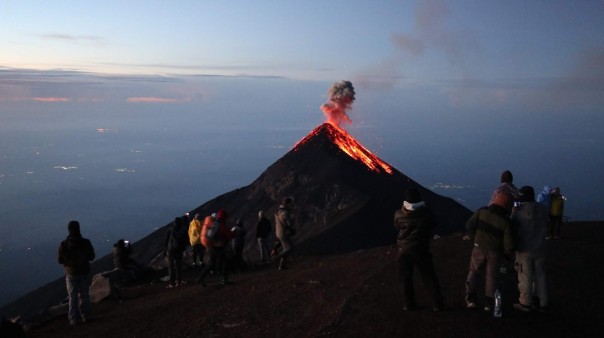 The easier alternative from Antigua. Most people who consider Acatenango or Fuego as too challenging, opt for this day hike to a smaller – but active nonetheless – volcano. A bit touristy with a marsmallow roasting session above the lava.

No list would be complete without the highest mountain in Guatemala and Central America. Despite having an elevation of 4220 meter, it is considered a bit easier than Acatenango. Mainly because the trail starts at a higher elevation. Easiest done from Xela / Quetzaltenango.

San Pedro is one of the easiest volcanoes to climb (however still not a walk in the park). It is located at the shores of Lake Atitlan and offers tremendous views over the lake. You can easily reach the trailhead by tuk-tuk from the village of San Pedro la Laguna and pay the entrance fee which includes a guide. However, the last few years many people have been victim of armed robberies near its summit (similar troubles are also frequent on Volcan Agua). Therefore most guides don’t take people all the way up there anymore.

There was a time you could climb all the way to the rim of Volcan Santiaguito, one of the three active volcanoes in Guatemala. However a enormous eruption in 2016 blew half of the mountain away and resulted in a restriction of hiking to the volcano. Instead, you can opt to climb Santa Maria from Xela / Quetzaltenango to be rewarded with great views on this impressive volcano. 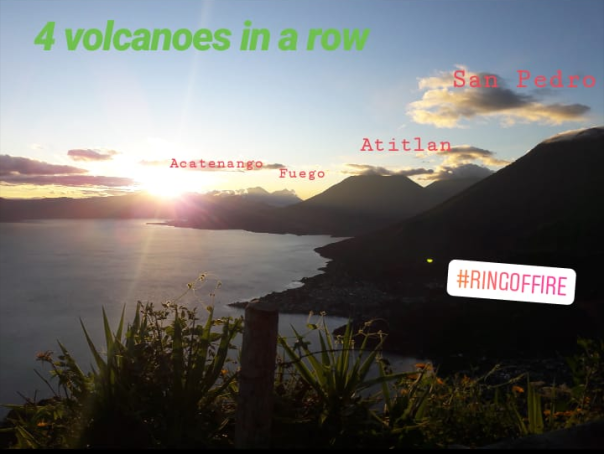 ← The Volcanoes of Antigua, Guatemala
Lake Atitlan – a paradise with downsides →