It’s 21.30pm on a Friday night when we enter the courtyard of the abandoned Newsham Park Hospital in Liverpool. Several flashing lights direct towards us. People just like us have gathered here to go look for a ghostly appearance, unexplainable sounds and actions or even better… communication with the other world. We are on a ghost hunt.

Besides double-decker buses, red phone booths and the many pubs on every corner, England is famed for its castles and abandoned buildings. What most people don’t know is that these places are supposed to be haunted. All over the country there are many ghost hunts organized at locations where paranormal activity is claimed to be high.But are these ghost hunts a tourist trap, aiming at credulous people to spook them out, or is there more? We were looking to experience it ourselves by attending a vigil and spending a night in Britain’s most haunted castle.

As you can guess, these ghost hunts take places in locations where paranormal activity has been observed and which have a sinister history. But what to expect from a group of paranormal investigators looking for ghosts, you might wander. A vigil is a period of keeping awake during the time you usually spent asleep, especially to keep watch. And that’s basically what it is. During these hours we attend sessions with a scientific approach and are trying different methods to actively search for contact, interspersed with many breaks munching on tea and biscuits while sharing experiences with other team members. A group normally consists of believers as well as non believers and a whole bunch of sceptics, including us.

Scepticism that turned into disbelief when we didn’t get any signs of paranormal activity while most others had already witnesses ‘curious things’ and even had been touched by ghosts. Our disbelief turned back into scepticism when a member of our group showed us a pretty scary picture of his last visit to Newsham Park Hospital on his cellphone. A picture taken in the naughty boys corridor, a corridor where misbehaving children were punished by being locked up in small cupboards. In his picture there was a dark shadow at the end of the corridor.  Would there really be ghosts in the building? Our mind was set to start some more targeted sessions. Armed with an EMF meter, six of us were send to an abandoned room in the attic. With lights on green, we started our call-out. “Spirit, can you give us a sign. Let us know of your presence.” The lights stayed green. Other rooms seemed to be more succesfull. The lights kept changing from green to red. When John, the oldest of our group starts his call-out, we clearly hear his name be repeated through the crackling sound of the radio. It didn’t make us believers, but it was enough to regain our interest.

The former orphanage – slash – asylum has a history of suicides and inhuman punishments of children misbehaving. Actions that would cause tortured souls to haunt these corridors for years after their death. With many doubts we roamed with a small group towards the naughty boys corridor. A place that would haunt your dreams for a long time even without the scary stories. By the technique of table tipping, a type of séance in which four participants sit around a table, place there hands on it, and wait for some movement, we started our call-out, hoping to get contact with the spirits of any of the abused little boys. With two groups at the same time, we started our session: “Spirit! Can you move the table, please! Move the table please, spirit!” 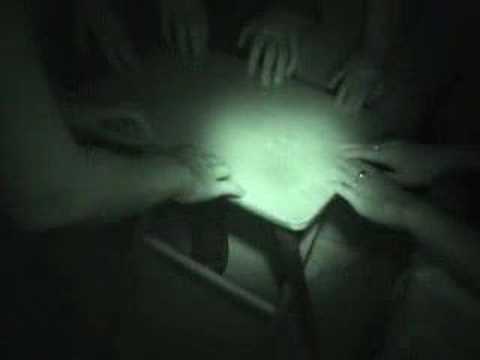 In an almost begging tone of voice, someone of our group started the call-out. No response. Hoping for improvement, another person continued. “Can you please move the table spirit. We mean you no harm.” “We have contact!”,  shouts someone from the other table. Shuffling the table moved over the stone floor. The movements were getting more intense until the table even starting heeling over heavily with loud bangs. Our table still stood still. We changed tables and as if we were emitting some kind of negative energy, our previous table started to move while ours stayed motionless. One of the younger people at the other table had no trouble connecting with the spirits and joined our table to give us the same experience. And yes, shortly after our table started heeling over as well. Sceptic as we were, our eyes were more set on the fingertips of our group touching the table than on the movements. Is someone tipping over our table? Our scepticism forced us to search for an explanation, but all fingertips barely touched the wood surface.  As if someone wants to erase our doubts, a candle at the end of the corridor lit up. And when the paranormal investigator asks the spirit to blow out the candle, the candle dies. Is there an explanation for this? Our vigil leaves us with more doubts than before.

A few months after our visit, this group picture was taken in the same location and claimed as real.

Our next stop is located in Northern England, in Northumberland to be more precise. Chillingham Castle has a reputation of being ‘Britain’s most haunted castle.’ Being the setting of several television documentaries reporting about ghosthunting, the castle makes we have high hopes of this one. Chillingham Castle has notorious reputation amongst ghosthunters, but we won’t participate in another vigil. No, this time we decided to take things as they come and to spend a night in the Grey Room. A room where several guests have spotted orbs and ghostly appearances, including sightings of Blue Boy, the most famous ghost of the castle. After having explored the castle grounds we decided to take some pictures of our room. “Believe it or not, but there is something strange on this picture.’, Linsay said when looking at the first picture on the display of her camera. “And it’s situated just above your head.” The picture showed a white shadow of something that seemed to be a face, leaning over my shoulder reading along in the book I was holding. It appeared we were going to have a strange night ahead of us.

Our ‘ghost picture’. Notice the white shadow behind my head.

The hours passed without any curiosities, but around 1am when we were sleeping, a shindy woke us. Cracking sounds, something seeming to be banging doors… the noise continued all night, but we succeeded in falling asleep again. Shortly after 2am my cell phone rings. Strange, since I didn’t have any reception ever since we’d arrived at Chillingham Castle. I don’t answer, but five minutes later, my phone rings again. When I try to call back, it doesn’t work. No reception, remember? The next morning we browse our experiences. My cell phone ringing twice in the middle in the night when there is no reception, and when we leave the castle grounds a few hours later and call the number back, it appears this person has never called. And what about the strange noise in the middle of the night, we believed to be the wind? The whole evening there was complete silence in the castle. It was only after 1 am the noise of banging doors started and as the morning arrived and the first visitors entered the castle the noise stopped. Perhaps…

The full travel story of our experiences with ghosthunting in England can be read in our book London2Edinburgh. Interested in joining a ghost hunt. Check out the best locations and some beginners tips to start your first ghost hunt!