Kilimanjaro: A Polar Bear in Africa 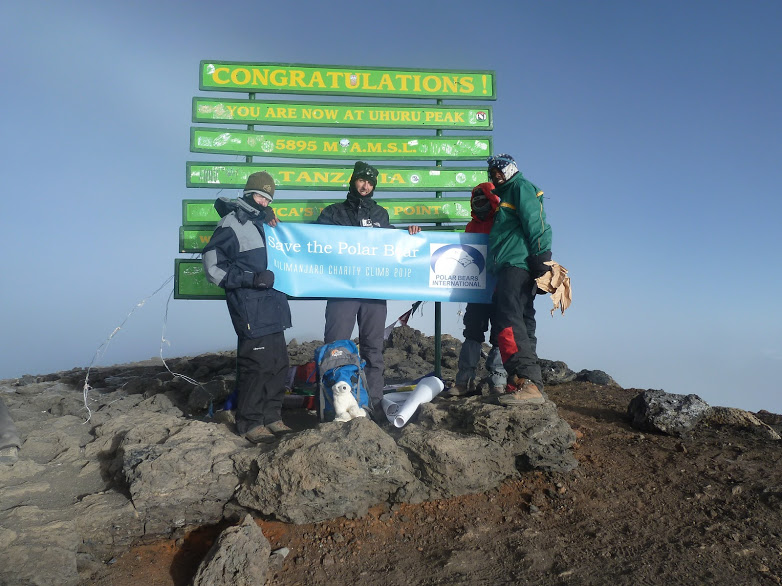 The African sun is burning on our face. We stroll through the sandy streets of Moshi, Tanzania. The city at the foot of Kilimanjaro looks like the stereotypical image we had of an African city. Sand roads, old cars, dilapidated buildings and above all hot. Very hot. Moshi is the base for many tourists who want to climb the Kilimanjaro, Africa’s highest mountain. Including Ruben and me.

“Load your duffel bags in the trunk,” Salim tells us, with his sunglasses on his bald head.

He points to the van that is waiting for us at the entrance of the hotel. Salim is petite and small in stature. Despite being hardly older than Ruben and I, he will guide us to the top of the Kilimanjaro in the coming days.

‘Save the Polar Bear, the coolest of all bears’, he reads from our T-shirts before a curious look gives the impetus to tell us our story. The Kilimanjaro is 5895 meters high making it a very big challenge. We therefore decided to link our ascent to a charity, Polar Bears International. An organization that is responsible for the conservation of the polar bear and its territory that is under great pressure due to global warming. 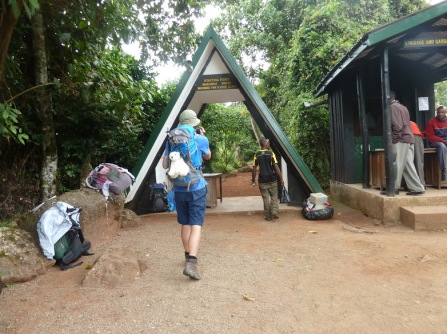 With a plush version of the endangered species hanging on the outside of my backpack, we enter the Kilimanjaro NP. The trip to the Mandara Huts, the first camp located at about 2800 meters, runs through a tropical rainforest. Through a stone-made trail we walk along the trees that are covered by usnea. Only seven kilometers away, but it soon becomes clear that our backpack is too heavily loaded. Despite the fact that we had porters to carry our duffel bag upwards, and so we did not have to carry almost anything of our belongings. Still, our backpack was full of energy-rich food. A decision that revealed our inexperience and at the same time our fear of African cuisine.

The locals had already given us some tips to successfully reach the top of ‘The Roof of Africa’. And our guide Salim also emphasized what is important to end up on top of the Kilimanjaro. ‘Pole, pole’, which is Swahili for ‘Slow, slow’. It is the slogan on the Kilimanjaro to maximize your chances of success. In contrast to other mountains, you have to overcome a high altitude in a short amount of time, so the chances of altitude sickness are big. With a really slow pace, we hiked the seven kilometers in about three hours. It seems incredibly slow, but it is the only way to properly acclimatize. The route we had chosen is the Marangu route, a route that would bring climbers down to the top and back in five (us in six) days. Our first night we would spend at the Mandara Huts (2700m). 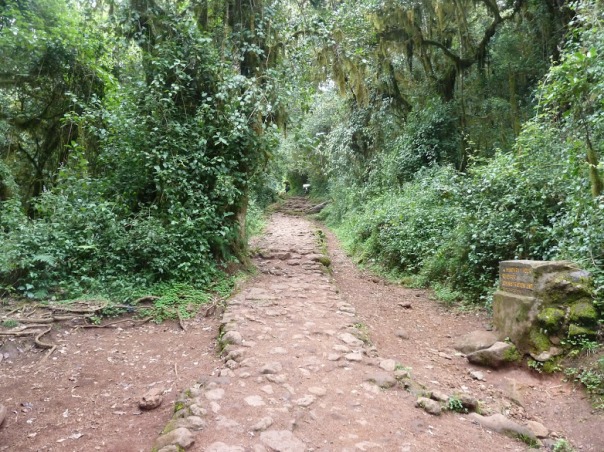 “Great, it is pitch dark and now I have to go to the toilet.”, I think, turning around in my bed looking for a position so that I could forget my full bladder. Isn’t it bad enough that I’ve been cold all night because I decided to sleep in my sleeping bag liner? “Africa is warm.”, I thought. “Why would it be different at night?” The decision to keep my sleeping bag for higher altitudes when it would get cold soon broke me up. Stubbornness and the fear of waking up fellow cabin roommates, caused me to still not remove the sleeping bag from my backpack. I also heard Ruben swaying in his bed, but decided to remain silent. After all, he had also followed my advice to keep the sleeping bag in the backpack. Turning around in my bed did not make any sense anymore. I got up and looked for my head lamp in the dark. I would have to get used to the fact that I often have to go to the toilet at night. A negative side effect of Diamox, a medicin for altitude sickness that we take. The reason for this is that we are no longer afraid of our stamina, but of the altitude. Something we have never experienced before. Acclimation was the only way to prevent altitude sickness … and Diamox, so we hoped.

In the morning we are awakened by Salim at seven o’clock and we got coffee and tea as a boost. Something that Ruben and I could use well given the short night. After a hearty breakfast with porridge, a kind of oatmeal and eggs with sausages, we left from the first camp. Because we would soon climb above 3000 meters we were advised to dress a bit warmer. After all, the weather on a mountain is unpredictable and the higher you are, the colder it gets. The vegetation changed after only half an hour. We left the tropical rainforest behind us and were now in savanna territory. No more trees that offered us shade and protected against the African sun. 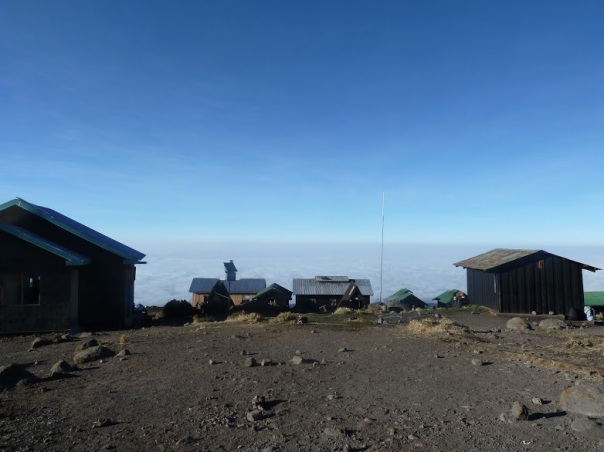 “Pff, we really did not need warm clothes,” Ruben sighs.

“The eleven miles to Horombo Huts will be tough today,” I sighed as well.

The backpack that was only slightly lighter than yesterday did not really help us either. The lack of trees at this altitude made us see more of the landscape on Mount Kilimanjaro. Almost the entire route to the second camp we could admire Mawenzi, a second summit of Kilimanjaro. With 5100 meters it is only slightly lower than Uhuru Peak, or Kibo as the guide refers to it. We also saw the peak for the first time today. Like a big black rock lying on the horizon, with a patch of snow on the side, our goal lay ahead. However, the patch of snow was a glacier close to the highest point. The glacier, which has shrunk in recent years as a result of global warming. Just what we want to draw attention to with our ascent. 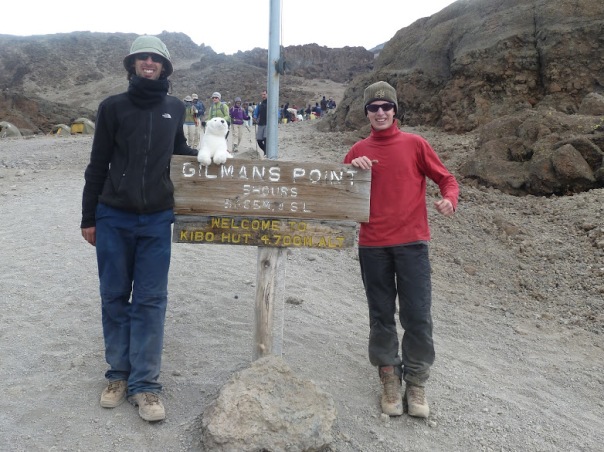 The summit would remain constantly in our view in the coming days. Even when having a rest day the next day in Horombo Huts (3720m) from where we make an acclimation walk. However, it is only on the fourth day, when we head to Kibo-Hut (4700m) , that the summit seems to be getting really closer. A long stage through the Saddle, a large arid desert-like plain between the two great peaks of Kilimanjaro: Mawenzi and Kibo. During this day before our final summit bid it becomes clear that we have not reached our goal yet.

The last climb to the crater rim looks particularly steep. It is therefore during this last night to the top that more than half of the climbers have to abandon their attempt. Altitude sickness, whether or not in combination with the fatigue of seven hours of climbing in freezing temperatures as the main reason. Add up that you do not have the time to sleep decently and you’ve got yourself a challenge on your hands. Once we arrive at Horombu Huts in the late afternoon, we have to start that last climb at midnight.

Our guides enter the room and wake us up. The whole room is moving. I hear Ruben crawling out of his sleeping bag on the bed above me.

“This is it.”, passes in my mind. “Now the challenge really starts.”

Immediately I grab my clothes that I have laid out only a few hours ago. I feel the adrenaline flowing through my body. I put on my four layers of clothes and look around me. There are about fifteen people sleeping in the room. Although sleeping … At this altitude and with so many people you are considered lucky if you get some  sleep. “Two hours of sleep is enough in Kibo.”, our guide had told us yesterday. But how long have I slept? Did I sleep? I only remember the many nervous noise that was in the room when we were in our bed. 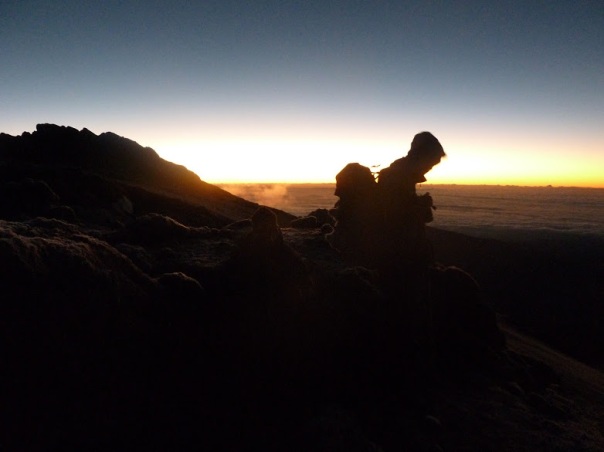 A few hours later most groups have already started their night climb. We just finished our ‘breakfast’ and wait for our guide’s sign. Ruben is still nervous. That was already noticeable during breakfast. He is still not comfortable with a good outcome. After the sign of our guide we also start our attempt. We zigzagged straight up in a line. Our guide first, briefly followed by Ruben, then myself and finally our assistant guide, who walks for the first time with usin case someone needs to get back due to altitude sickness. Our first goal we set is Gilman’s Point (5681m). This is five to six hours of walking from Kibo Hut. It’s pitch dark. The only view we have to Gilman’s Point is the meter of ground in front of us that we constantly illuminate with our headlamp. We do not see our endpoint. Only the many lights of fellow climbers who are already climbing several tens of meters above us.

After two hours we see the first climbers fail. We are barely halfway and many are in need of rest. Their breathing is like they have just pulled a sprint. However, the speed upwards is not higher than 1km / h. A real death march, as it were. The first difficulties start to arise in our own team as well. Ruben feels unwell, but nods when Salim asks him if he can continue. Only half an hour later his stomach complaints worsen and he vomits. He now feels a little better, he says. The assistant guide takes over his backpack so that he can save his strength. Again we climb further. After a little more than five hours of climbing, we reach Gilman’s Point, the crater rim. The next goal we set ourselves is Stella Point (5785m). Ruben jumps aside and crouches. Again he has to vomit. I call the guide that he has to wait. I ask if he’ll manage to continue. He nods. Even though he does not have much energy left, he says. 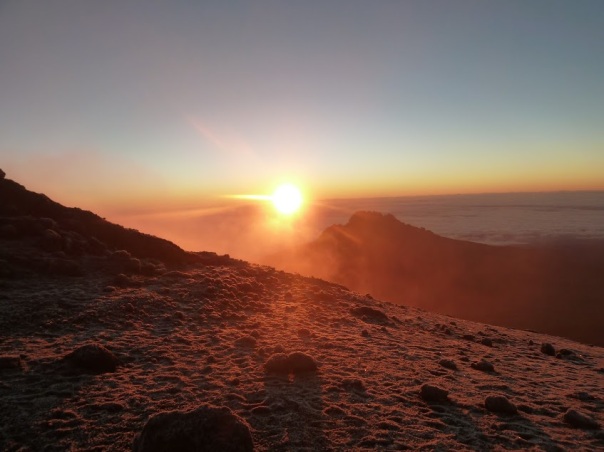 Ruben is completely weakened by vomiting. Your body does not recover at this altitude. After all, your full energy goes to the inclusion of the maximum amount of oxygen. A level that has fallen to about 50%. “You do not have a headache?”, Salim asks Ruben. He shakes his head.

“Rest a moment, then we continue.”, he says.Salim tells me that his nausea may be because of the nerves he had before the night climb. It is not altitude sickness. I still feel fine. Gilman’s Point seems to be the end point for many climbers. For some, the headache has gotten too bad to continue. Some people are so troubled by dizziness that going further would be irresponsible. “Ok, let’s go!”, Salim says. 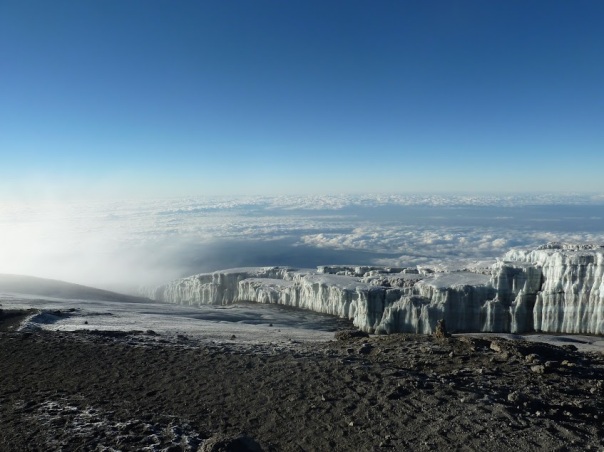 The sun has now risen above the cover of clouds. We have now passed Stella Point and can see the end point, Uhuru Peak. Even if it is still in the distance. I enjoy the view of the glacier, the cloud cover and the rising sun. Perhaps this is the best view I have ever witnessed. With the certainty that we are reach our goal, the euphoria gives me an extra boost. If they ask me to run to the top, I’ll do it. A strange thought if you see how most groups are working towards Uhuru Peak with their own death tug. Ultimately, a final sprint is no longer necessary, because at 7:13 AM Ruben and I find ourselves on top of Mount Kilimanjaro! A moment we could do nothing but enjoy. The highest point of a continent. 5895 meters above sea level! Our first Seven Summit was claimed! 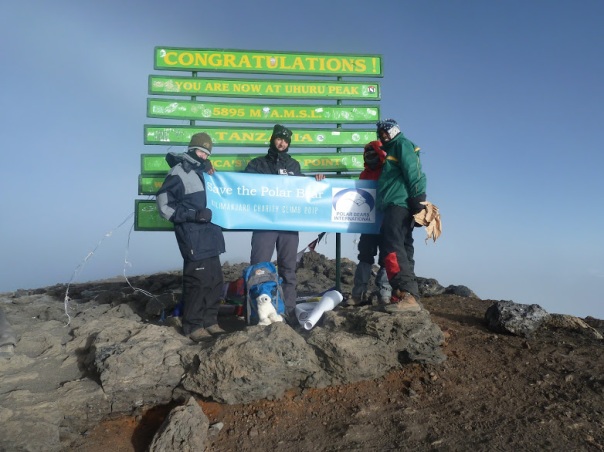 Watch our vlog of Kilimanjaro here 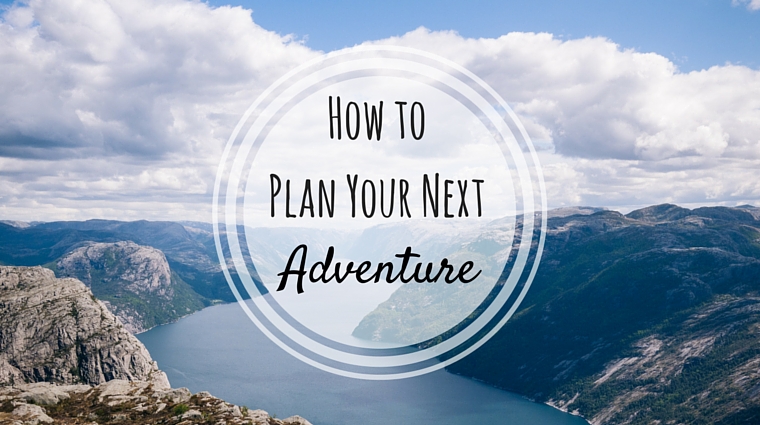