Down the rabbit hole: exploring Crystal Cave in Belize 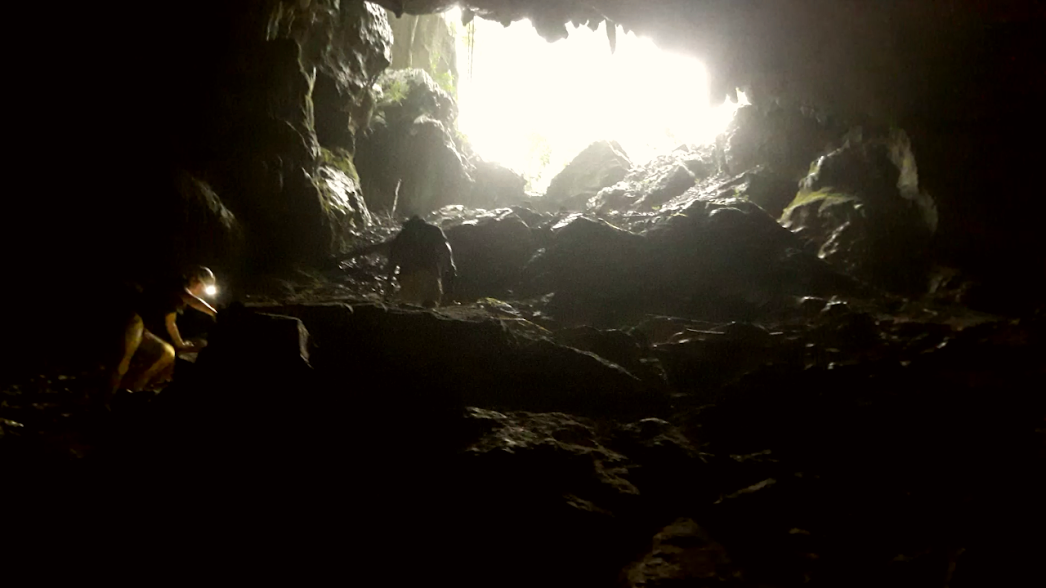 I suppose this is the reason why they call it a rainforest. It has not stopped raining since we left San Ignacio. When we approached the Hummingbird Highway towards Blue Hole NP, it got a lot worse and rain fell out of the sky in buckets. And it is not even the rainy season.

It is not that we can say that it has been better in the past few days. The shoes I wear are still damp and are full of mud from our visit to the ruins of Cahal Pech yesterday. We are standing at the parking lot of the Blue Hole National Park in Belize, about twenty kilometers south of the capital Belmopan. For the first time we head into the jungle. Towards an adventure that I was looking forward to the most: exploring Crystal Cave, perhaps the most demanding day trip from San Ignacio.

A walk of about 45 minutes. That is what awaits us before we get to the entrance of the cave. ‘I estimate the difficulty of the trip about eight out of ten,’ says Marcos, a guide with Maya origins. We are not intimidated by Marcos’s assessment and put our backpacks in the trunk of the car. I quickly take my drinking bottle and GoPro when Marcos is waving his arms to leave. For a brief moment the trail seems to be doable, but after about fifty meters the stone path turns into a real mud pool. In the jungle, holding on to the branches and trees is not an option. You never know which animal is on the back of the trunk, or what dangerous insect is camouflaged so much you did not see it. And then we don’t yet take Poisonwood into account, a poisonous tree species that grows here and of which a touch of the bark is enough to make you sick.

The journey does not become a demonstration of my Tarzan-like skills to swing from vine to vine to keep me straight on the slippery path. With legs often extending widely, my technique is better described as a clumsy ballet dancer. Mud, smooth stones and roots hidden half-underground. Enough obstacles to cause a fall leading to a mud bath. Especially when we have to overcome some altitude meters. That I am not exaggerating becomes clear when Linsay falls first on her buttocks before we reach the entrance cave.

Eventually I succeed in reaching the entrance of Crystal Cave without a fall. Although this feat is hardly noticeable because of the large amount of mud on my trouser legs. Caves such as Crystal Cave were sometimes called Xibalba by the Maya. Literally translated it means ‘place of fear’ or ’empire of shadows’. Not an inviting term, but what did you expect from a place that was used for rituals and human sacrifices. Fortunately, as far as we are aware of Marcos’ plans, this is not on the schedule the day.

To explore Crystal Cave, we first have to abseil about five meters into the dark hole. Marcos sets up a system and descends first. I follow and shortly thereafter it is Linsay’s turn. The sunlight barely reaches the beginning of the cave and so we quickly put our headlights on and descend further down the cave. Anyone who thought that this would be the most difficult part would have thought wrong. In his free time, Marcos often goes out to explore new caves himself, and he plans to give us the same experience. Not much later we come across a first Maya site. Remnants of pots and a fire place are easy to recognize, even though it is only illuminated by the light from our lamp. Crystal Cave is full of it.

What really revolved around me in discovering the caves of Belize was the experience of really doing some caving. Narrow corridors and crevices that you have to squeeze between. Deep below ground, while only the light from your headlight illuminates the road ahead. You would become claustrophobic for less. That was the biggest fear of Linsay before we started this adventure. Murmuring yourself down a small corridor and then suddenly get a panic attack. Fortunately, she is very brave. I myself enjoy the adrenaline boost that you get when you crawl further under a low ceiling to end up in a larger hall. Exploring the inner forces of the earth is a lot like climbing a mountain, I think. More than once we clamber from one stalagtite to the other. The only difference is that we are climbing down here. 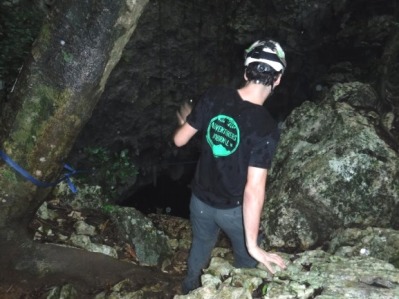 We have been exploring Crystal Cave for almost two hours when we arrive in a large hall. “So far everything seems to be going well with you,” Marcos begins. “Do you want it a little more adventurous?” We nod. He points to a narrow opening at the top. “Behind it is Wonderland,” he begins. A more difficult piece that requires more scrambling. “Only one in ten groups ventures out, depending on the capacities of the group.” We have fallen so deep into the rabbit hole that Wonderland is next, I think to myself .. 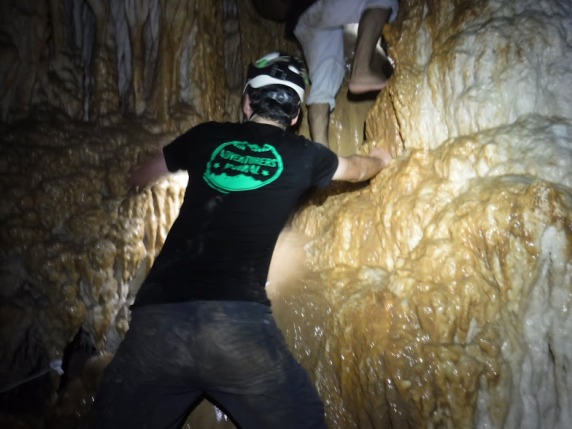 We take off our shoes and socks and walk towards the starting point of Wonderland. I feel the smooth surface of the ground with my bare toes. Somehow this feels even better than with shoes. I pull myself up on a smooth protruding rock to get to the entrance of the corridor that leads to Wonderland, about a meter above the ground. In the meantime we are about 180 meters below ground. The light from our headlight makes various rock formations sparkle before darkness absorbs the light. This place, which is only reached by a few people per day, is rightly called “Wonderland”.

Back to the sunlight

Climbing 180 meters down slippery rocks and crawling under low ledges is a heavy physical exertion. To travel the same way back up is much more. With equal care, we work our way past the many crevasses and boulders that are sometimes larger than a car. Our arms and legs meanwhile feel quite tired, but it is not possible to rest for a long time deep underground. Linsay, too, wants to go back upstairs as quickly as possible, because she is slowly getting anxious and the claustrophobia is starting to play. When we see the first rays of sunshine again after many hours, a final steep and very slippery wall awaits us before we climb back out via the rope. After spending six hours in the darkness, the sunlight is blinding. Eventhough it is partly cloudy and we are still under the dense foliage of the jungle. From our toes to behind our ears we are full of mud and we’re sure we will feel our tired legs and arms until tomorrow morning, but the discovery of a new dark (under) world is one that we will never forget. 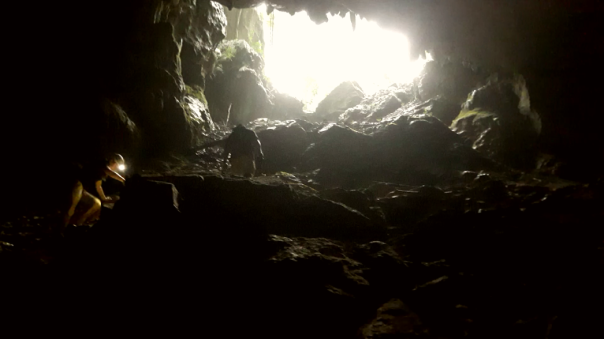